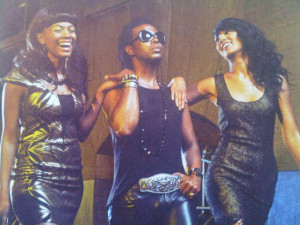 Celeste Voges is an upcoming model from Durban living in Johannesburg. This photo popped up on her Twitter feed in November 2012. David Tlale who shares a birthday with my ex-girlfriend on 29 January was hired to designed accessories for Legit, a retail outlet under the Edcon Group. Something that’s not clear is whether she modelled on the ramp for any of Tlale’s fashion shows. She certainly has the height for it at 1.75m tall.

Even though it’s “old news” in the fashion industry, it came back to me recently when I saw the poster in a store in Uitenhage of all places. I met Celeste about a year ago at Nino’s Rosebank. She was interested in working as a part-time photographer for this blog. We never got around to formalising the agreement and remained in touch.

You must have a look at her portfolio on the Ice Models website. Celeste Voges calls herself a photographer, model, poet, romantic, purist, alien on her Twitter bio. She lives up to this by posting sometimes cryptic and never boring updates. I often wonder whether they come from her own creative imagination or whether she samples from the greats in history like Lord Byron, Alfred Lord Tennyson or perhaps Alexander Pope.