‘When I went to America after winning the first M-Net Face of Africa, I struggled,” said Nigerian international model, Oluchi Orlandi, as she tried to hold back her tears.

“I want to dedicate the next five to 10 years of my life to giving back to my African community and bringing Africa’s Next Top Model here is the place to start. I may look 22, but I am not, so I can’t keep doing this; someone has to take over from where I have left off,” Orlandi said.

Africa’s Next Top Model will seek out beauties across the continent and have them converge in Cape Town to compete for the job.

“We are trying to have a show that will celebrate the beauty of the diversity of Africa. I have people in New York who said I would never find beautiful women here and that bugs me. I want to change that perception,” she said.

With South African Tourism on board, it makes sense for the show to be shot in this country. Orlandi also said she had a personal reason for honouring this country with the hosting rights.

“The show will showcase the beauty of Africa, and South Africa in particular, but personally I am doing this to pay homage to the southern African region. My career started out around here so I would like to begin a young girl’s dream around here,” the model explained. 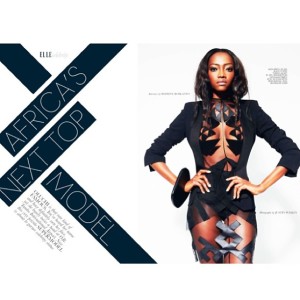 Orlandi will be the show’s host and executive producer. She confessed that it took a while to put the show together and there is still a lot more work to be done.

“It is no easy feat to be in my shoes. Being the executive producer means being the one to call CBS in Los Angeles and ask for the rights of such a show. It also means meeting South African Tourism and showing them what a show like this will do for the country and the continent’s image in terms of tourism and fashion. It also means convincing M-Net and Multichoice on who Africa needs in a show like this. There are a lot of pieces that need to add up before you even get to announce it,” she shared.

In Sandton, Joburg, to await the local auditions, Orlandi had just jetted in from Mozambique where she had conducted their auditions.

“The turnout was great and we may or may not have found girls we are looking for there. We are optimistic South Africa will show more promise,” she said.

Eight countries will take part in the auditions – Tanzania, Ghana, Mozambique, Angola, Kenya, Ivory Coast, Nigeria and South Africa. However, all African women are urged to audition and those whose countries are not holding auditions can visit a neighbouring nation to do so.

“It is open to anyone with an African passport because they will need to travel to Cape Town where most of the show will be shot,” explained Orlandi.

The definition of African beauty is a subject that always sparks debate. What is perceived beautiful to the Western eye is not necessarily what Africans agree with. So with this show coming to the continent it was also important to find out what kind of woman Africa’s Next Top Model is looking for.

“There is a specific height and weight we are looking for. Our girls should be about 1.7m. We even have a quota for plus-size girls, as long as we agree that they can get work after the show,” she said.

“The thing is, I don’t know what to expect, because Africa is vast so we have diverse cultures and there will be many surprises for us. Look at Big Brother Africa, the show keeps thriving mainly because Africans celebrate their differences and we’re hoping our show will do the same.”

There are loose ends in the development of the show, however, such as the winner’s prize and the members on the judging panel.

“The winner will come back to New York with us, but there are things we need to tie up with regards to what their contract will entail. Also, we are looking for the right judges for our show. They have to be people with a sound understanding of the continent, its cultures, fashion and what would work at an international level,” she said.

While there are several TV channels in Africa which will air the show, Orlandi also pointed out that there are some international markets that have expressed an interest in the programme.

“I recently learnt from the marketing guys at CBS International that they had received a call from Australia where some channel in Sydney wanted a piece of the cake. This helps us, especially when we consider that this is a rare moment when we get to tell our own story. We don’t have a lot of that,” she said.