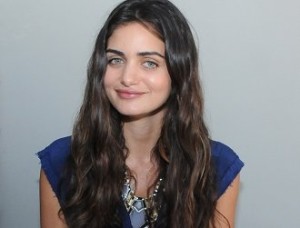 INTERNATIONAL model Gabriella Demetriades is one of the world’s most recognisable faces after gracing the covers of magazines in South Africa and worldwide.

A little more than three years ago Demetriades was an ordinary girl from Parsons Hill in Nelson Mandela Bay but her life was turned upside down when she was spotted in a crowd and went on to compete in Miss Indian Premier League (IPL) Bollywood in 2009.

Beyond her striking good looks lies an astute businesswoman with a marketing and communications degree, a clothing line recently launched in South Africa and a budding Bollywood acting career.

Demetriades, who is of Greek parentage, said she sees her meteoric rise to fame and her booming modeling career as just “another career and every job I go on is seen as part of a business I’m running”.

Demetriades took time to have a chat over coffee with La Femme at the Friendly Stranger about her modelling career and her business ventures before jetting off back to India where she now lives.

I love my career because … I get to travel and I have the freedom to explore other interests.
I have a soft spot for … bacon.
I should have studied … psychology.
I’d love to party with … Winston Churchill.
I’m listening to … The XX.
When I was 16, I wish I knew … How important family is.
I’ll know I’ve made it when … I’m on holiday for six months of the year.
The people who taught me the most are … my parents.
My music weakness is … alternative country.
Nothing makes me happier than … a good conversation.
I absolutely hate … small mindedness.
I am saving to buy … a pair of Isabel Marant slouch boots.
I share my life with … those I love.
I can’t go a day without … my boyfriend.
In 10 years I see myself … as an improved version of myself.
source: La Femme / The Herald