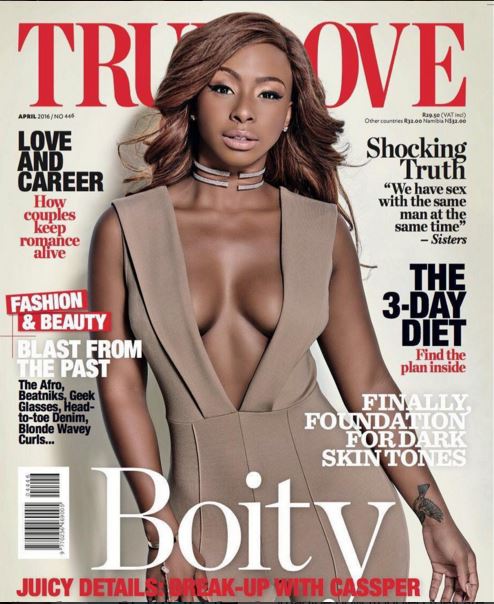 Boity Thulo covers the latest issue of True Love magazine where she dishes on details around her and rapper Cassper Nyovest’s break-up.

Why did they break up? Well, Boity explained: “All it was was just time management – one was busier than the other – and it’s just time, that’s all it was.”

The two started seeing each other early last year and finally admitted to their relationship in a campaign for clothing label Legit of which Boity was the face.

They first dated while they were in school. Of this recent break-up, Boity tells True Love Cassper did not cheat and that their break-up was amicable. She says their issue was time management and they were ‘too busy for each other.’

“We broke up in December and I cried about it, I got angry about it, I tried to convince myself that its okay then eventually you are just like life actually continues,” said

Boity.She asked if he ever cheated on her, Boity told the mag: “No. Not once did I ever feel like he’s cheating on me or giving someone else attention or whatever, there was never a time where I fought about any girl. He was absolutely respectful towards me in terms of his female fans…”