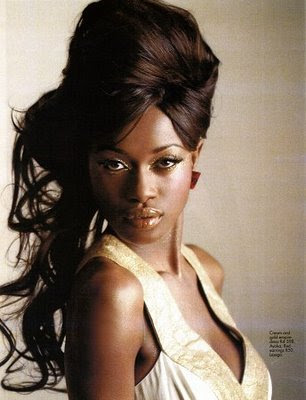 Swimsuit model Joelle Kayembe is “busting her ass” in bitterly cold London as she tries to support herself following her split from millionaire businessman Bongani Mbindwane.

The 26-year-old is struggling for money after her break-up from the CEO of mining company Platfields.

Her lawyer, Dr Nalini Maharaj, confirmed that Kayemba – who claims she is being shunned by the local industry since details of her break-up surfaced – has travelled to London to find modelling work.

Claims of physical abuse, abortion, sabotage and a pink Salvatore Ferragamo wedding gown torn to shreds emerged prior to the October 6 break-up.

The pair had a traditional ceremony in September last year, but Mbindwane disputes that they were legally married and has said they never concluded the second phase of the ceremony.

Mbindwane this week declined to comment, saying it was a private matter.

Kayembe – the first black woman to grace the cover of SA Sports Illustrated – has since been embroiled in multiple court battles with her ex.

On Friday, the High Court in Johannesburg granted a final order in her favour allowing her the right to continue living in their luxury Sandton home.

Mbindwane is forbidden from setting foot on the property.

But the victory was bitter sweet.

Earlier this week Mbindwane slapped Kayembe with a lawyer’s letter demanding that she pay back R77418 that she spent on his American Express credit card between October 13 and November 23, as well as R189131 for “maliciously” damaging his Audi R8.

The other personal belongings that he wanted her to return to him by last Friday included:

According to the letter of demand from Mbindwane’s attorney, Sam Niselow, Kayembe had replaced the cash, cellphone and scarf with an envelope containing her hospital admission slip for an abortion.

“Your client’s conduct in doing so is malicious in the extreme and calculated to inflict maximum pain on our client,” the letter stated.

It went on to say that when Kayembe terminated her pregnancy when she was already 17 weeks into it, she contravened the Choice on Termination of Pregnancy Act. Maharaj said her client denied all these allegations. None of the items were returned as they will form part of the pending divorce application, she added.

“The credit card was given to her to use at her disposal, in lieu of the fact that she was to be a lady of leisure and was his bona fide wife whom he instructed not to take on modelling contracts,” Maharaj said. Responding to the demands, including the inference about an alleged illegal abortion, Kayembe told Maharaj in an SMS from London: “I was well within my rights, wasn’t I? It’s my body. I am the one busting my ass off out here in the cold (London) ‘cos no one wants to work with me back home.