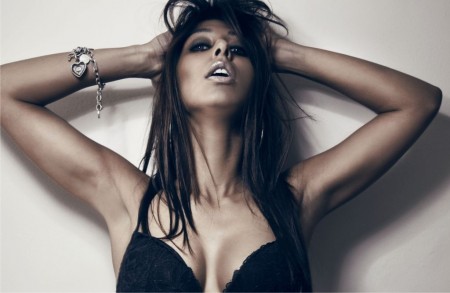 A sexy Johannesburg model’s tweet has landed her in a spot of bother. Third-year law student Sabina Essa, 21, tweeted on Wednesday about a bribe she had paid to a Metro police officer after being pulled over for speeding.

The tweet caught the attention of corruption watchdog the Justice Project SA (JPSA), who named her their “Zero of the Week”.

Semi-nude pictures of the model – which appear on men’s magazine FHM’s website as well as on her Twitter and Facebook profile, and which were published in several national newspapers this week – have also earned her criticism.

Essa was caught out on Twitter saying: “Just got out of a R2500 fine for going 140 in a 60 zone. R30! Bwahahahaha. I love JMPD.” When a Twitter follower asked her if she had offered the bribe, her response was: “I didn’t offer; dumbass. they asked what I had, Of course, I’m gonna take the offer.”

However, Essa told the Sunday Times Extra that the “tweet was a joke blown out of proportion.  I was pulled over for not wearing my seatbealt. I just made up the story about speeding and bribery as a joke for my friends and followers, that’s all it was. I do overplay situations at times for a laugh but I was stupid to tweet about it.”

Essa said it took her a long time to convince her conservative Indian family that she knew what she was doing with her modelling career and that the incident had “shaken that foundation”.

She said while she was aware of criticism surrounding her choice to become a model, she didn’t represent any community or sector. “My commitment to academics far outweighs my modelling and I want to one day excel as a lawyer specialising in conveyancing. I do not condone corruption and this has been a painful and valuable lesson for me.”

Essa said she was offered a lucrative modelling contract in India recently, but had turned it down because she loved South Africa and wanted to complete her studies here. She warned people using social networking sites to be cautious about what they said.

“It’s happened to so many people – we all make mistakes but I’ve realised that the world is a cruel place and once you are in the public eye, you are completely alone and vulnerable.”

National chairman for the JPSA Howard Dembovsky said Essa would not be prosecuted.

“There is insufficient evidence of a crime having been committed, no matter what she tweeted. However, this is not to say that this will not return to bite her one day. Prank or not, what she tweeted has earned her publicity which will not have a positive influence on her career in law.”

He said when initially contacted about the tweet, Essa was emotional and concerned about the consequences of her actions. Faizel Suleman, chairman of the South African Muslim Network, said while Islam could not condone Essa’s revealing pictures, she could not be condemned by society.

“There are those Muslims who gamble and consume alcohol also, but that is ultimately between them and the Almighty,” he said. FHM editor Brendan Cooper said while Essa had a profile page on their website, she was not an FHM model. “The lady would have to appear in the actual magazine in order to earn that prestigious reputation,” he said.