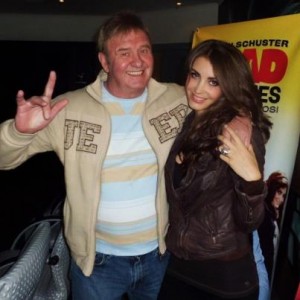 Durban born model turned actress stars in latest Leon Schuster movie and proves that she is not just a pretty face.

It is no secret that beauty and fame go hand in hand in Hollywood. Since the Marilyn Monroe era, some of the most successful stars on the silver screen started off as models.

The latest local star to join the sorority of models who aspire to master acting is Durban-born Tanit Phoenix. But Phoenix success has not just been thanks to beauty. She’s had to work hard.

Phoenix’s grunt work is finally paying off because she is the lead actress in Femme Fatales, a 13-part contemporary film noir series by HBO.

And, despite her growing profile in Los Angeles, when home calls, Phoenix answers. So, when Leon Schuster asked her to be the lead actress in his latest film, Mad Buddies, she agreed, without hesitation.

“I love Leon. I’ve been a fan of his candid camera work since I was six years old. And I got to know him when I played the nurse in one of his pranks on Schuks Tshabalala. He’s got his own unique brand of slapstick comedy, which South Africans respond to very well,” says Phoenix.

In Mad Buddies, she plays Kelsey de Leeuw, a conniving TV producer who manipulates enemies Boetie (Schuster) and Beast (Kenneth Nkosi) to embark on a road trip as unwitting subjects of a reality show.

On camera, with the whole of South Africa in on the joke, the pair come unstuck, until they discover they have been conned and join forces to get revenge. The 27-year-old beauty began her modelling career when she was 15 and quickly made a name for herself by starring in commercials for and then becoming the face of American Swiss Jewellery, Nivea and Alberto V05.

She moved on to being an international fashion model, walking the ramps of shows in Milan and Paris. Her transition from modelling to acting came after a film producer spotted her while she was on a photo shoot on the streets of Paris.

“He came up to me and said I should come for a casting. I’d dreamed of becoming an actress since I was six years old, but my modelling career happened to pick up first, so I agreed.

“I tried out for a female lead and I obviously didn’t get it.

“A few months later I found out that Angelina Jolie got the role and that I had auditioned for the movie Alexander.”

Soon Phoenix was being called to more auditions and she was eventually cast in her first Hollywood film. It was a brief appearance as one of Jared Leto’s girlfriends in Lord of War.

After that she continued to get cameo roles in big films like Gallowwalker starring Wesley Snipes, John Cleese’s Spud and, most recently, Safe House, which stars Denzel Washington and Ryan Reynolds. Phoenix admits that her pretty face has helped get her noticed more than once, but she says her commitment to the characters she plays, regardless of how small the part, is what lands her roles.

“In LA most of the girls are models or beautiful but that alone won’t get you the role, even if it is a small one. I had to show them that I was capable of delivering and eager to learn from all the established actors I was surrounded by,” says Phoenix.