In interviews City Press held with friends and close acquaintances of the YFM DJ and her 5FM-jock former boyfriend, it emerged the two had been having problems for 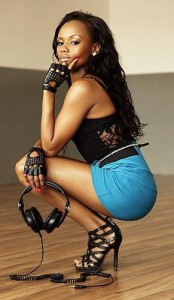 One source said Matheba was “in tears” at a party a few months ago, proclaiming “DJs make rubbish boyfriends” and telling other female guests to “never date a DJ”.

According to another friend: “In December, Bonang said she had broken up with Themba because she used to come home from her trips abroad to find doeks and strands of weaves in her bed. She said she would never date a DJ again because they will ‘show you flames’ and disrespect you.”

The two are now involved in court cases at the Randburg Magistrates’ Court.

In early June, Matheba, 25, was allegedly beaten up by Nkosi, 28. He is reportedly facing three charges – assault with intent to do grievous bodily harm, domestic violence and malicious damage to property.

According to reports quoting court papers, Matheba infuriated Nkosi when she went to his house in Westdene, Johannesburg, to collect her things and left without closing the gate.

He followed her to her Hyde Park complex, where he broke a window to gain access.

Heat magazine reported that Nkosi pulled Matheba’s weave, hit her with his cellphone and wrestled her to the ground. She was saved by neighbours who heard her screams and took her to hospital.

Nkosi handed himself over at the Bramley Police Station and is out on R3 000 bail.

Matheba has taken out a protection order against him.

In DRUM magazine, Matheba’s lawyer Bongani Khoza is said to have provide

d evidence that Nkosi wanted to “destroy” the presenter and FHM model.

not going to stop until the truth comes out so maybe hire a hitman to take me out because it’s going to get real,” read an SMS Nkosi allegedly sent to Matheba.

Since the allegations came out in early June, Nkosi has seen his reputation take a knock, especially on Twitter.

Those in entertainment circles claim she cheated on Slikour with Euphonik, then cheated on Euphonik with one of her former Live colleagues as well as a Kaizer Chiefs player.