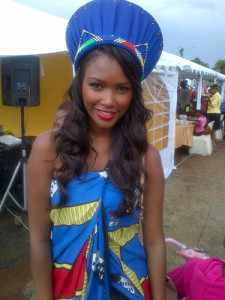 THEY have to walk in impossibly tall shoes on the ramp, work ridiculously long shifts and have to live with every square inch of their bodies being scrutinised.

According to Paledi Segapo, a modelling agency co-owner and a former Miss SA judge, it takes more than just a beautiful body, tiny waistline, high cheekbones, good skin and a model’s strut to be a good model.

But to get jobs you need to have that extra something, including being emotionally matured to succeed in an image-obsessed and highly fickle industry.

He says the economic climate is not making things easy for the models either. He says companies have trimmed their budgets and models have to take anything from clients.

Kgomotso Seboko of KS Models agrees that there is not too much work coming the way of models these days. He says because of hard times, clients want the best out of every deal.

“They want models with the whole package, including looks and the right attitude. This is a small industry. If a model is hot, word about her spreads fast.”

We look at local models who are making it despite the industry’s hardships and fierce competition from their continental counterparts whose exotic looks have become a rage in the industry.

Poppy Xaba has one of the most sought-out faces and bodies in South Africa. Her chocolate skin and high cheekbones are her defining extras, and her waiflike strut is regal and assured. She has done print campaigns, including the cover of Edgars Club magazine, among others.

She is highly versatile and can go from high editorial to mass market and back to high editorial without blinking, yet give all campaigns authentic credibility.

Kwakho Qongqo is tall, gorgeous and her face has launched a number of products.

Qongqo came into the spotlight when she became third in the Miss Teen 2000. It was the first time in the history of Miss Teen SA that a black contestant came with natural hair. This was when her career really started to open up as she signed for Ice Models and proceeded to adorn the pages of some of the most exclusive magazines, including Glamour, True Love, Marie Claire and Cosmo, as well as major catwalk shows for household designers. She was also in the famous FHM Calendar in 2009 and has done a lot of retail magazine work and beauty products launch.

The Ice Models beauty remains hot on the runways.

TV’s it girl, Pearl Thusi, knows how to work the moment. Hailing from KwaZulu-Natal, this smouldering beauty has unique features that oscillate from fresh faced girl next door to high couture.

She has a growing number of accomplishments and a long parade of magazine covers, commercials, a Real Goboza (RGB) co-host, Zone 14 actress, and you can practically spot her face in every fifth commercial that is flighted endorsing everything from beauty to diary products.

She is highly popular with retail magazine campaigns such as Edgars, Mr Price and Woolworths. The only snag is that her height is limiting her from doing a lot of ramp work.

Anyone who doesn’t know Rosette Mogomotsi has probably been living under a rock for the past couple of years. Despite being a tabloid-magnet because of her media mishaps (her tumultuous relationship with former TV presenter Andile Ncube has been highly documented) she is still one of the best models in South Africa, and humble one.

Most stylists and photographers in the industry laud her for her anti-diva pleasant personality, her brilliant smile and kindness. She has been voted FHM South Africa’s sexiest woman, among other modelling achievements.

Mogomotsi is also best known for her role as a suitcase model in the game show Deal Or No Deal.

She has modelled in television commercials for Chicken Lickin’ and Jet Clothing and her face dominates editorial fashion and beauty shoots like the True Love, Elle, Babe.