This was a shock for me because I believe it breaks new ground – Melinda Bam named Sexiest in the World! 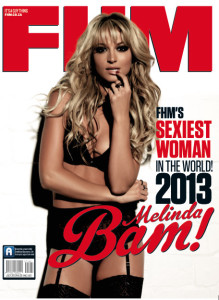 Former Miss South Africa Melinda Bam is the 2013 FHM Sexiest Woman in the World. Bam finished ahead of local hotties Minki van der Westhuizen and Lee-Ann Liebenberg, among others, and ahead of international stars like Kate Upton, Arianny Celeste and Mila Kunis.

The former Miss South Africa was awarded the honour at a party at the Skyroom Live in Joburg on Friday night.

Bam, who was placed 13 on last year’s FHM 100 Sexiest Women in the World list, featured in the 2010 FHM calendar. On Friday Bam said it was an honour.

“It feels a bit surreal because I can still remember in 2010 when I did the calendar, I was on the 100 list but thought… okay… winning, never going to happen – and now it did! I’m so thrilled,” said Bam.

Bam, who was crowned Miss SA in 2011, said she had enjoyed posing for the FHM calendar, but it was very different to what she had expected.

“I have always had my reservations about FHM because I have never seen myself as someone pushing her limits to try and be sexy. But I must say, having the team that I shot with was great because they all understood what I will and will not do,” said Bam.

The 24-year-old blonde bombshell now has two top titles under her belt – FHM’s Sexiest Woman in the World and Miss South Africa.

“It’s quite weird and flattering.”

She is also the new national executive for Miss SA and will be helping with some big and exciting changes this year.

She is also a partner in Model Mentality, a series of workshops hosted for young women. And she is looking at designing clothes for Bambshell. “It’s a swimwear range that will give women of all shapes and sizes the confidence to embrace their bodies.”

So what can we expect next?

“Not to disappear. I know God has made me a mover and shaker, and I will remain just that.” – source Independent On Saturday