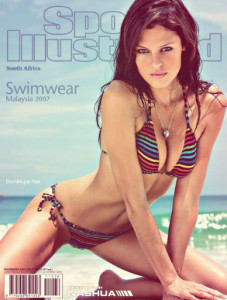 Ryan Seacrest is dating Sports Illustrated model Dominique Piek. The American Idol host, who split from Julianne Hough (24) in April after three years of dating, has reportedly moved on with the 27-year-old South African beauty, who is also newly single after ending her one-year relationship with Star Trek Into Darkness actor Chris Pine in April.

A source close to Piek told In Touch magazine: “She and Ryan have been out to dinner together twice in one week recently.”

The insider said that while the duo are still getting to know each other, Seacrest (38) “gets along really well” with the brunette model.

The TV presenter was recently overheard telling pals he has been “loving it” since he became single again, and he was previously spotted taking a gorgeous blonde companion into the DJ booth with him in Los Angeles earlier in June.

Seacrest and Safe Haven actress Julianne are believed to split, because he didn’t want to get married and take their relationship to the next level. The professional dancer got tired of waiting for an engagement ring and so called the romance off.

A source previously said: “He just wouldn’t propose. However, Ryan was this close to looking for rings. Julianne is the only girl Ryan has allowed himself to get serious with.”