Nelson Mandela: The stylings of an icon

South African Gavin Rajah is the only fashion designer in the world who is also a UNICEF goodwill ambassador.

He is the co-founder of Cape Town Fashion Week and the first South African ever invited to show at Paris Fashion Week.

Rajah talked to Al Jazeera about Nelson Mandela’s personal brand of fashion; the style that came to represent the leader’s time in the public eye; and the panache that he brought to the world of local and international politics:

“As a fledgling democracy, South Africans struggled to find an identity and a common denominator that instilled pride, hope, compassion and love. Nelson Mandela represented that new identity or search for a new world devoid from apartheid and its attendant evils. 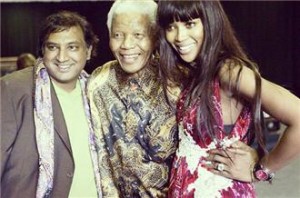 Thus, his sense of dress was atypical and, in a way, maverick – a strong departure from other heads of state who tend to choose formal ensembles or stick to a purist path of wearing traditional dress. He elevated his style [in a way] that was akin to his politics – he chose to rather work around the context he was placed in.

His donning of the national team’s rugby jersey during the World Cup [in 1995] was in a sense more than just support for the team, he was in effect, asking South Africa to stand together and support a sport that was largely followed and played by the predominantly ‘white’ populace of the country.

It was the best example of the politics of dress.

He also, very early, started wearing less formally tailored shirts that had digitally manipulated prints which were not distinctly African in nature but at the same time not far from the typical traditional motifs and design one would find on the continent.

These [batik silk] shirts became a signature item in his wardrobe and conveyed a sense of warmth and openness in his approach to the people he met and interacted with.

In a way, looking back, his dress code typified his status of being called ‘Tata’ which literally means father – his clothes had a laid back quality and warmth often found amongst elders in rural areas in South Africa.

For the rest of his style, Madiba was a social chameleon easily adopting other cultures by wearing their traditional dress or elements thereof. It spoke of more than political pleasantries but rather was an affirmation of his ethic and what he fought for – the right to recognise the humanity in one another.

His dress sense embraced people, cultures, and instilled a sense of new hope and pride for not just people in South Africa but around the world.”