Where in the world is Candice Hillebrand?

A quick look around online seems like Candice Hillebrand became a professional female wrestler in WWE! Her Twitter profile pic is not as flattering as we’ve seen before – Webmaster. 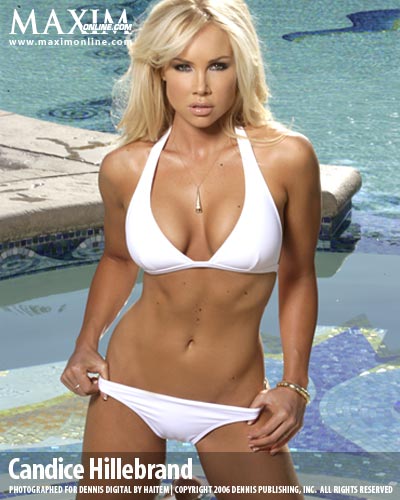 Remember Candice Hillebrand from the kids show MNET’s KTV? How could you forget, she was the hottest blonde on television in 1990.

Candice attempted a singing career after leaving her innocent girly days behind her, but not before posing semi-nude in a couple of men’s magazines. She signed with South African independent record label Musketeer Records and released her debut Chasing Your Tomorrows in 2003.

“People seem to live for the future rather than for the moment,” Candice says of the title. “It’s the nature of the world we live in, work jobs we hate to buy things we don’t need.” She was always smarter than we gave her credit for being.

In 2004 Candice signed a 5 album deal with Sony UK and pulled her debut record from the shelves to re-record the album in London. Her SA manager told the press that anyone who owns the original album should hold on to it because it will soon become a “collector’s item”. There are many young boys on the East Rand still holding on to that album, don’t worry boys… it’s coming soon.

She released an international version of the album with Sony UK in 2005. Sadly the do-over didn’t do much and the album barely made an impact. And even though her singing career has failed to take off, Candice has not given up. 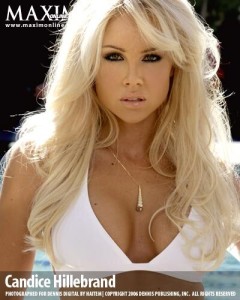 “My heart is drawn to different cultures, such as the Native American Indian (mainly Lakota and Hopi) and Buddhists. I think those cultures have a lot of great philosophies on living. I love song writing, yoga, rock climbing and making crystal jewellery. I love to laugh and spend time with my niece and nephew, they are such great teachers! I enjoy Hugs… big ones!!” This is how Candice describes herself on her MySpace profile.

Candice has since left the UK and is now conquering the great USA. She moved to California two years ago to pursue an acting career. Hey, if Charlize could do it…

Perhaps the move wasn’t all bad. Candice is finally using her natural talents to play the “hottest female fighting character in video game history”. She’s landed the role of Nina Williams in the movie Tekken, which is based on the popular video game of the same name.

Could this be the movie that catapults Candice into the celebrity stratosphere? We’ll have to wait a bit longer to find out. The movie is still in pre-production and will only be released later this year. But we’re holding thumbs.