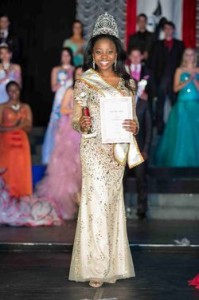 The 15-year-old Grade 9 pupil at Crawford College in Sandton, Johannesburg, stole the crown from under the noses of 30 other contestants from all over the world.

Her triumph gives Mzansi the distinction of being home to two world beauty queens, with Rolene Strauss winning the Miss World title in London last December. In addition to scooping the overall title, Ncala walked away with the Miss Talent title as well as Photomodel of the Globe. She wowed the judges and wooed the audience with her kwela dance moves in front of hundreds of guests at the gala dinner.

Ncala enthused: “I’m excited. It hasn’t sunk in yet that I have won. Winning the title will give me a platform to talk to the youth about peer pressure and focus on diabetic kids.” Her mother Trinity told Sowetan that following her win, Ncala is poised to be profiled in international magazines and is already working with a Bulgarian designer known as Deina, who makes clothes for her.

Trinity said all contestants were judged on behaviour, interaction with others and dress code.

“They also did a lot for photo shoots and ramp modelling, and Katlego mastered them all.

“I am overwhelmed by Katlego’s achievement. I am a proud mother who wanted to see her daughter succeeding.”

Trinity said Ncala devoted her time to her school work and her ambition was to study business at Harvard University in the US. The beauty pageant was organised by the World League of Beauty and Fashion.